Pictures from Athens: a Greek sense of humor while queueing at ATM 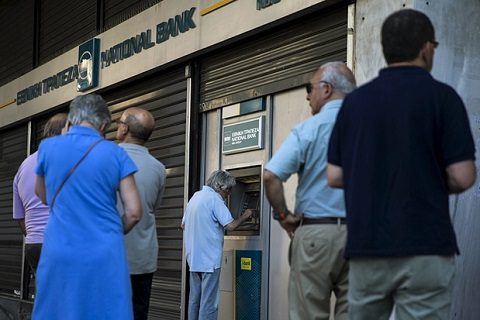 By Giovanni Pallotta from Athens

The night between the 25th and the 26th of June will be remembered as one of the most dramatic nights in recent Greek history.

The announcement of Mr. Alexis Tispras, the Greek Prime Minister, during the Council of the Ministers, to ask the Greek people whether they want to accept or refuse the “Troika” proposal in order to pay the creditors of the Greek debt is something that no one could ever have imagined.

It is quite important to underline that the Greek Constitution does not allow referendums for Economic and Fiscal decisions, so, whatever the result of the July 5th vote, the Government can still move autonomously, however, Tsipras’s decision is something that has never happened before in European history.

Following Tsipras’s dramatic speech before Greek television cameras, other members of ΣΥΡΙΖΑ tried to explain that Prime Minister’s decision is to understand public opinion in order to decide the best political strategy to apply.

The other parties, Το Ποτάμι, Nεα Δημοκρατια and PASOK (the political “father” of ΣΥΡΙΖΑ) are convinced this was a last attempt of a desperate man who has lost all his allies in Europe (Tsipras identified Italy, another country facing bankruptcy, as Greece’s only ally) and as a leader who had disappointed all the citizens of his country.

In any case, Tsipras is quite sure that the Greek people will vote in favor of the agreement with the Troika.

Political polls show a situation where 70% of Greeks want to remain in Europe while 50% want to stay in Europe at “all costs,” and so he hopes to have the endorsement of the Country in order to sign the agreement without losing his personal consent, still it is a very hard bet.

Personally speaking, it is impressive to see what the reflections of the political decisions in everyday life are. Today, while I was taking my “Sunday walk” around Athens, it was quite upsetting to see how many people were queueing in front of ATM in order to withdraw money.

The fear that from Monday the Greek banks won’t have any cash is real and during this weekend the prevision is that people will withdraw up to 700 million Euros in cash from the banks instead of the average of 30 million during a typical weekend.

It was also alarming to see the increased number of Αστυνομία (the Greek police) officers and ΔΕΛΤΑ officers (the police special corps) patrolling the city; many more than I had seen in previous months. However, at the moment there isn’t any news about problems or disorders in Athens or in nearby cities, nevertheless the situation is closely monitored by the National Security System.

Over the next few days, political manifestations will be held all over Athens, and in particular, the actions of the Anarchists forces, who have their own core area in Exarchia Quartier (quite close to Syntagma Square and the Parliament Building) will create many worries for the public order.

In all this frightful situation, the Greeks have never lost their own particular, sense of humor; while I was drinking a coffee near Syntagma Square, I started speaking with an old man who made me laugh. He said, “Every day, in the newspaper, I read that we aren’t rich anymore, that the golden times are gone forever; well maybe I am too young, but I have lived here since I was born and I can’t remember any of these golden times.”

Whatever happens, and in this moment no one knows what will happen, it is pretty sure that Greeks won’t lose their own “Greek” attitude towards life.