...and the useless gladiators of the Peninsula 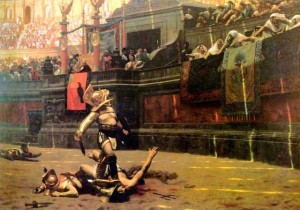 Since the times of  “Guelfi” and “Ghibellini” Italy has been the country of a civil war never coming to an end. Whithout going back too much in the History, it is indeed curious the fact that since the time of the armistice during the World War Two (1943) the Italians have been unable to get together in a new country. The political disputes are generally the same as the ones reported in the history of the civil war.

A lot of people taking part in the “partito nazionale fascista” before the war was able to resettle after the war either in the “Democrazia Cristiana” (DC), the former, apparently catholic, pro western wing or in  the “Partito Comunista Italiano” ((PCI), the former pro sovietic wing. But the first problem of every party in Italy is not the political line, but the struggle among the different caucuses, in other words, the eternal fight among the “primadonnas” of the political stage. Italians were called in the elections of ’48 to choose not only the side of the Iron Curtain where to stay, but even the tyrant to obey. Since then all the political elections are perceived as the armageddon of democracy, but the interests behind them are all the same.

Any time a change from the war “status quo” was at sight, like in 1960 with the “Tambroni cabinet”, violent communist protests led the country to be hostage of hidden agreements between DC and PCI.

In the Seventies the excuse of terrorism was enough to set up the so called “compromesso storico”, the cabinet intended to join DC and PCI, just forgetting the fact that the terrorism was inspired by the Soviet Union, like in other countries.

In those times from the law faculties all over Italy the PCI activists tried to develop the dream of getting the power through the exploitaion of the judicial system, for this reason they invented “magistratura democratica” the caucus of communist judges looking for the “via giudiziaria al socialismo” (socialism through the use of trials). The  hoolingans well known to the police of those years, organized in goon squads, throwing molotov bombs in any demonstration, are now esteemed members of the judicial “nomenklatura”, of the state owned enterprises management, and are generally given the possibility to seat at least for a one term mandate in the Parliament, just to get a pension to add to the ones provided before. This is a system dominated by the politics and in which all the people out of the left wing oligarchy and, in particular, new generations, are not admitted.

In the Eighties Italy seemed a quite happy Country, Italians were in a process of “riflusso”, the trend to leave ideologies behind. Good salaries and an apparent prosperity really gave the feeling that the ideological era, together with the Berlin’s Wall fault, was over, but the system was just boosted by an enormous public debt, the oligarchy at that time in power, called CAF (Craxi, Andreotti, Forlani) from the names of the leaders, was not able to amend the system in order to establish a real perspective of an efficient administration and a well-working state to inspire and mantain a strong trend of economic development.

In the Nineties the new left wing oligarchy defeated the CAF system and was about to get the power, but Silvio Berlusconi freezed them by winning the 1994 political elections.

Since then Italy is the arena of a useless struggle between funny gladiators fighting for their own fortune while the economy is choked by an incredible amount of taxes needed to mantain a bureaucracy incapable of any positive action.

This oligarchy, strongly linked to the world finance speculation, was able to paralyze and to overthrow the government in 2011 just to provide support to a left wing dominated bank (Monte dei Paschi di Siena) via the usual increase of the taxation.

It doesn’t really matter whether Mr. Letta’s government will remain or not in place as long as the Italian politics continue to raise taxes without any perspective of state efficiency, Italy continues to be on the ragged edge of the default.

p.s. After the downfall of Mr. Craxi and the PSI (Partito Socialista Italiano), and the possible downfall of Mr. Berlusconi, Italy continues to be the unique Country in which democracy is discussed in judicial trials. Who’s next?

Italy, the country of the unlimited government

Comments to The never ending civil war of Italy