Mini Naja: the conscription is back (funny military manoeuvres in Italy) 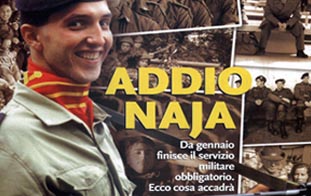 The conscription in Italy is over since 2003, but in the mindset of some politicians the conscription continues to be a sort of requirement of the Italian citizenship. Veterans associations are complaining about the fact that they will fade away quite soon because of the lack of youngsters to recruit.

A new solution was chosen to solve this problem: a mini-conscription called “Mini Naja”, a strange word with uncertain origins. We are talking about a three weeks long training term, to put a backpack on the shoulders of these kids, to do some trekking, some basic training about the specialties of the Army such as mountain troops, airborne and, quite soon, maybe, cavalry, tankers and so on.

At the end we have a sort of old kid (18 – 30 years old) ready to join one of the associations formerly known as “ associazioni d’arma e specialità”, the Italian way to keep former soldier together.

The dangerous question is:”What is this for?”.

Could be a sort of marketing for recruitment, but it is related to very few people, so that could be considered just an expensive way to promote recruitment.

Could be a sort of civil education term, given for granted the ineffectiveness of Italian school to explain the kids what the State is for. But the Italian education system is not involved, so that it seems that the Defence Ministry is claiming to be part of the school system to improve the education, a disputable statement.

Could be an attempt to support the veterans’ associations to keep a certain level of presence, but on the social networks the former conscripts, coming out from a twelve months duty service, eighteen in some cases, do not look very happy to be in the same bunch with people without an effective training.

Could be something to build up reserve units, but three weeks are just useless to reach a minimum level of military training.

It is interesting the fact that the majority of these new recruits by now go to the “Associazione Nazionale Alpini”(mountain troops veterans’ group), an association often exploited by the Northern League as an useful tool to get votes.

In a time of economic crises, and in a time of consequent budget cuts to the military system, and additional task to an overstretched army looks like a small sin, just because the cost is limited: six million euros.

As usual in the public arena, the most difficult thing is to state “who does what”. An old issue when a system is too complicated and the public interest is uncertain. Any effort, maybe based on reasonable elements, is just a waste of resources out of the appropriate frame.

In Italy, like in a lot of European Countries, a serious consideration of what the military is for and its links to the national strategy is dramatically missing, despite the seminars and conferences held all over.

p.s. “Daddy! May I go on a mountain holiday in Sankt Moritz?”. The father replies:”No, it’s too expensive, but if you are able to wear a mountain cap you can join the “Pianeta Difesa” program: taxpayers are funding, you just need a sponsor in the mountain association”.

Comments to Mini Naja: the conscription is back (funny military manoeuvres in Italy)